You should aware there are various Birds poison as for example avocado is lethal for Budgies!

The avocado fruit is fantastic, and most people’s favorite. I love the fruit; it’s one of my favorites. In some countries, it’s so highly regarded that people aren’t ready to trade it with anything. Well, that’s just the degree to which humans can eat and enjoy this sweet fruit. What about our pets; the cats, dogs, and birds that we keep? We surely love them and would want to give as food anything we enjoy them too. But wait! Is it possible for that to happen? Not really. Not everything we consume is advantageous to our dear friends, especially the birds. Avocado is one such example of a forbidden bird fruit.

Do you know why? If not, then this blog will help you understand why avocado is lethal to birds, specifically budgies, what happens if they do eat it, and what to do if a budgie eats it. Read on to find out more.

The issue of avocado poisoning initially created a lot of confusion and controversies among bird keepers for a long time. Even so, after some time had passed, clarity about the issue was made, and there came to be scientific discovery on what could be true.
Some traditional bird breeders had voiced that the fruit may have been toxic, while others gave it to their birds without noticing any abnormal incidences. That prompted thorough research on the subject and the release of several scientific articles explaining the logic behind the fruit’s toxicity. About half of the United States’ grown avocados are for human use and are available either as fresh fruit or processed paste products. The other fraction helps in making various products, including oil for human consumption and dog meals. What of birds?

Even if the amount of the published research on avocado toxicity in both humans and animals is more limited than other subjects, the truth is that the fruit can be toxic in some mammals and several birds. Numerous annual confirmed cases have proven that; studies have been performed in the last few years to back up that conclusion. Traditional veterinarians believed that the lethal chemical was limited to the avocado tree’s bark, skin, leaves, or pits. However, modern literature has shown that problems resulted after fruit consumption too.

Severe allergic reactions resulted, and such reports also indicated possible cross-reaction to proteins in other fruits like bananas, cantaloupe, and kiwi. That suspicion showed that preceding sensitization to avocado ingestion can be formed by eating such foods, thus, precipitating an anaphylactic reaction. Birds aren’t humans, and their allergies are still a poorly understood concept. Like most animals that experience harmful side effects upon consuming avocado plants, birds also face such-like consequences. It won’t be wise and fair to find out how much risk exists; that’s a must-not-try thing.

Why Avocados Are Lethal to Budgies

Why is it not advisable to give avocado to your birds, especially budgies? Caged birds like budgies tend to be more sensitive to the fruit’s effects compared to non-caged ones like hens that seem more resistant. What then makes avocado lethal to budgies? Simply put, it’s a poison. But, let’s discuss more on that.

Avocado has a toxic substance called persin which poisons budgies. It’s a deadly toxin that has been shown to affect even large domestic animals like cows while rarely affecting dogs and cats. Dogs and cats only face more risks if a large avocado seed is swallowed in part or whole, causing a foreign body obstruction in the esophagus, stomach, or intestinal tract. Pancreatic inflammation (Pancreatitis) is also possible because of the high-fat content in avocados.

The presence of persin as a fungicidal toxin in avocado makes the fruit lethal and unsuitable to your budgies. The poison is an oil-soluble compound with a fatty acid-like structure and leaches into the fruit’s body from the seeds. The concentration of persin is harmless to humans except those with allergy problems, but for birds, every part of the plant is dangerous and should be avoided. Avocado toxicity varies with the species, and the Guatemalan varieties are more toxic.

According to one veterinary manual, the toxin persin reacts differently in various animals in which it causes toxicity. Budgies fed one gram of avocado fruit developed agitation and feather necrosis and hemorrhage of birds and lactating mammals’ mammary gland epithelia. Myocardial necrosis (heart attack) can also result. Some investigators analyzing the molecular components of avocados have discovered several candidates to describe the mechanism through which animal cells suffer from the persin poison. They’ve found that it acts as an inhibitor of an enzyme responsible for animal protein metabolism resembling how proteinase inhibitors work.

Clinical Signs and Symptoms of Avocado Poisoning in Budgies

The clinical signs of avocado poisoning are due to the fat-soluble compound Persin. Budgies’ lethal dose of avocado toxicity is approximately 3.5 grams while that of cockatiels is 20-30 grams and canaries two grams.

The adverse effects of avocado poisoning in birds can be observable as fast as 15-30 minutes after ingestion and delayed up to 30 hours. There are several clinical signs that you will see in your budgies the moment they eat avocado with the first ones being weakness and depression. Other signs in affected budgies include:

They may display disordered plumage and a reluctance to perch being replaced by sitting at the cage’s bottom.

They develop dyspnea (breathing difficulties). Budgies with respiratory signs need to feel calm, warm, and comfortable. If this is realized quickly (within two hours of ingestion), the pet should be taken to a vet; otherwise, it will die. Respiratory signs are usually followed closely with death.
Throat and chest area edema (swelling) can also be seen and stimulate the breathing difficulty experienced by your buddy.

Heart muscle failure and swollen lungs and abdomen; tissues examined under a microscope revealed serious cellular damage to heart muscle cells and potentially those of the liver and kidneys too.

They also develop lethargy (lack of enthusiasm). Budgies are known for being lively creatures, and unless something is wrong, they’ll always be active. If that’s absent, then check out a probable avocado consumption, though not restricting yourself to that.

The initial signs and symptoms you’ll notice are the increased heart rate/ breathing difficulties, apathy and weakness, and inability to perch. Internal signs aren’t visual, but much acute and if not treated as emergencies might lead to sudden deaths. You should consider seeing a vet if you feel the budgie may be having swollen lungs and heart, and liver or kidney failure.

What should happen if you speculate that your budgie has eaten an avocado and there are signs of poisoning? What you do in such a circumstance is crucial. Handling the budgie can accelerate stress and worsen the clinical signs of intoxication. Thus, you should limit the time it stays in your hand during a physical examination. Capture it quickly but gently and if possible, placing the cage on an examination table might be easier and safer.

Get everything you need to examine the bird within your reach before capturing it. After it’s caught, hold it in dorsal recumbency with its head in-between your middle and index fingers. Use the thumb and little finger to hold its body, taking care not to restrict breathing; if you press on the sternum, the budgie might die from respiratory distress since birds lack a diaphragm. This handling method only suits small birds. If you have large pet birds, try and inquire how to handle them.

Avocado poisoning symptoms in birds usually occur within a maximum of 12 hours of a bird-eating avocado and death within 24 to 48 hours after ingestion. Unfortunately, there’s still no remedy for avocado poisoning, but an avian vet can offer your friend some supportive care for her symptoms. That includes intravenous (IV) fluids to assist with the dilution of the avocado toxin. It’s therefore advisable that any suspicion you may have about the budgie eating an avocado should get it to the vet right away

The diagnosis of intoxication depends on the history of exposure and clinical signs. No specific tests are available to confirm the diagnosis; only the signs and symptoms can indicate if the budgie was poisoned or not. We hope to see more research done to discover how to diagnose avocado poisoning in birds without having to rely only on clinical signs. So, what entails treatment of avocado toxicity? The treatment is nonspecific and can begin by inducing vomiting to remove the avocado from the gastrointestinal tract, followed by using oral-activated to absorb any remaining toxin.

Take your budgie to a specialist avian clinic

If you take your budgie to a specialist avian clinic, it is possible to give a crop lavage by dosing with activated charcoal using a gavage tube. The budgie may be sedated by gas anesthesia and an endotracheal tube put in its trachea to prevent aspiration. After placing a ball-tipped, metal feeding tube properly in the crop, it will be flushed with 10-20 mL/ kg of warm saline. It will then be massaged gently to destroy the ingested material, followed by aspiration. Once as much avocado as possible is safely removed, activated charcoal should be given orally at one to three (1-3 g/kg) of body weight. The charcoal acts by binding to toxins in the digestive tract and prevents absorption into the systemic circulation. This treatment is beneficial and can help. However, if clinical signs have already begun, the procedure would be futile.

The bird’s cardiovascular system requires close monitoring, including electrocardiography and blood pressure measurement. There will also be a need to obtain a blood chemistry profile and electrolyte levels. That might not be easy with birds. Usually, in human poisoning cases, it’s vital to collect a blood sample. But, for birds, their blood volume is approximately 10% of their body weight. Meaning, the amount of blood that can be safely collected from a healthy bird is about 1%. Collecting and screening this blood can be stressful and time-wasting, especially in budgies and canaries. Remember also that the stress of handling a bird to take a blood sample can aggravate the clinical signs, and such a small amount cannot be taken and processed effectively.

Avocado is not the only harmful food that your favourite pet shouldn’t eat. There are other several things that you shouldn’t expose a budgie to as they can even be more toxic than avocados. Let’s wrap up this discussion by looking at some of the other common foods that budgies shouldn’t eat. They are as below:

If you’re a bird-keeper, it’s appropriate to understand what your pet bird should eat. The discussion above can help you see why avocados aren’t suitable for pet birds like budgies even if you’re tempted to give them. That’s why you should not provide any part of avocado trees to birds even as perches or as chewing devices. Further, don’t cage your budgies under or near avocado tree groves where falling leaves or fruit may result in severe or fatal consequences. Prevention is always better than cure!

Can Parakeets Eat Bananas? Is it safe Parakeet Fruits?

How often do Budgies lay Eggs? Everything about Budgie Eggs 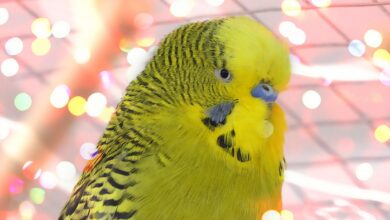 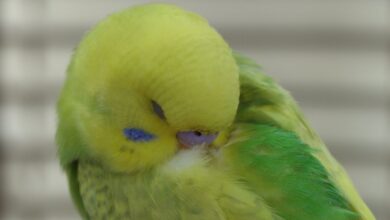 NORMAL BUDGIE BEHAVIOUR, what is normal, when to worry? 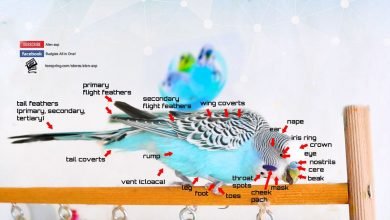 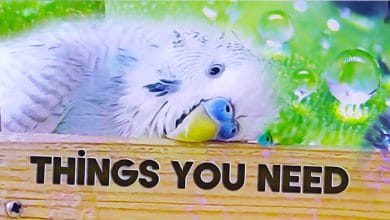