They love lots of space, toys, and of course humans. They can learn any language and can master up to 1728 words. Welcome to the world of a Budgie, the friendliest bird in the world.

A budgie, or Parakeet, originates from Australia. He showed up in Europe in the early 18th century and everyone loved him. He was easy to breed and became a popular bird in the homes of the rich. By the mid-18th century, most of Europe knew who this friendly little bird was.

America soon caught wind of this little charmer. By the 1920s, the Parakeet had found his way into American soil and became popular by the 1950s. Today the Budgie is the most popular bird in the world.

The Parakeet bird has a signature green color on his feathers. This was the only color he had before the world discovered his other family members. In India, the Budgie has a cousin known as the Indian Ring-necked Parakeet. He gets his name from the tiny black ring around his green neck. The Indian ring-necked Parakeet has a red beak as well.

His other cousin is the mustached Parakeet. The name comes from the black semi-circular patch below his beak, his mustache. He may also have red feathers on his chest contrasting with his green body.

An adult budgie is 6 to 7 inches long and can live for 15 years. His greatest ancestor is said to have lived for 20 years. With plenty of care and lots of love, the budgie can outlive his timeframe.

Raising a Budgie is just like raising your own child. He is sweet, bashful, and full of life. He loves a lot of space to run around and play with his human friends. Get him a colorful floor mat and you will be the best of friends.

Budgies are suckers for good company. Let him have a fellow budgie bird as a housemate. The Parakeet also gets along quite well with dogs, guinea pigs, or hamsters. Cats see budgies as lunch, so he will be a bit wary around a feline friend.

Budgies can prolong their lifespan if they are fed a high-quality diet. The best food for budgies comprises of nutritious bird seeds and budgies food pellets. For an all-rounded diet, include apples, melons, carrots, pear fruit, broccoli, pineapple and leafy greens on his menu.

Never feed budgies potatoes, the seeds of fruits, raw peanuts, avocado, rhubarb, or tomato leaves. Also, keep him off caffeinated and alcoholic beverages. All this can make the little budgie really sick.

Expect the budgies bird to learn a few words within 7 weeks of adopting him. Parakeet birds can say simple words like ‘Cutie, ‘Good’, or ‘Sweet’ or complex sentences like ‘How are you feeling today?’

The budgie is also a master of sounds and can whistle just like humans. Be careful not to use cuss words around a budgie though, he cannot tell the difference.

Get a budgie today!

Budgies are full of life and love. They are one of the few pets you can have an actual conversation with. Feed him a healthy bird diet and shower him with toys. He will be the best housemate to live with for years. 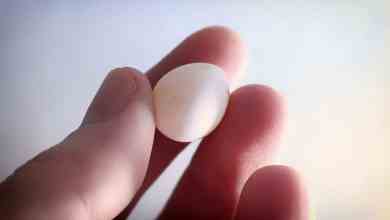 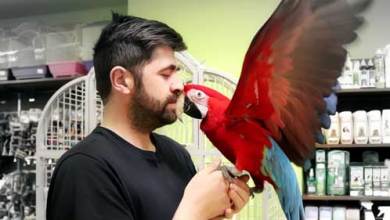 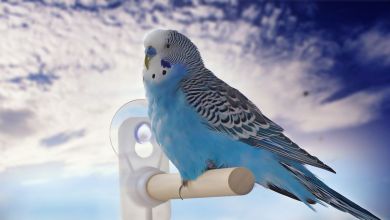 Can you travel with a Budgie bird? How to safely travel 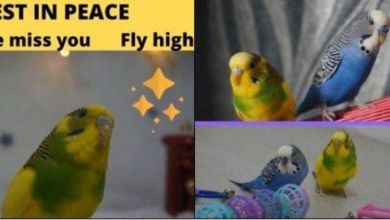